With the advent of the digital age, protecting data has become ever more paramount to the success of enterprises, both large and small. Data protection is not just a legal necessity; it’s critical to an organizations’ survival, let alone profitability. Modern firms have become data hoarders with petabytes of information stored in various levels and sources. However, one of the essential aspects of protecting information is that it requires data owners to classify the type of information that is deemed critical for business operations. An organization is not secure if finding the necessary data is going to be on the same lines as looking for a needle in a haystack. Moreover, it is not an easy task to identify the memory location of sensitive data.

Based in New York, CyberCentric is an enterprise-focused cybersecurity platform that monitors sensitive data and controls users’ access to prevent unauthorized use. CyberCentric uses artificial intelligence to ensure that the most sensitive data is only held by those authorized to view it. The company has developed a unique method of achieving almost 90 percent accuracy in natural language processing. By utilizing machine learning capability, the model identifies and classifies sensitive data and prevents further unauthorized access or leakage of such information.

“ We give a quite unprecedented capability for unstructured and unformatted data that is hard to create patterns for. That is the type of data that cyber centric looks at and classifies”

“Unlike Varonis or Titus, we have a capability of evaluating over apetabytes of data in real-time by using a cluster of four to five servers,” states Jeremiah Steptoe, Founder, and CEO of CyberCentric. The platform scans data across networks in real-time, reports the location of specific data, and collects traffic data for behavioral analysis. It further visualizes the entire cybersecurity network, enabling businesses to detect and identify doubtful malware activities. The platform also learns which employees have access to sensitive data and monitors employee usage of raw data to eliminate leakages of sensitive information.

“The areas where we excel are in the financial and the government space because we have an unparalleled capability to classify unstructured and unformatted data,” adds Steptoe.

THE ROAD TO THE CONCEPTUALIZATION OF CYBERCENTRIC

It was in November of 2015 that Jeremiah set out to build a cybersecurity tool to solve a particular problem within data security that he encountered while working as a consultant. After working for an aggravating amount of time on a project – to build rules for a well known DLP (data leakage prevention) tool – he realized that there had to be a better way to prevent the leakage of sensitive data.
His consulting client agreed with him, and they bought a tool to simplify a few key issues surrounding the DLP solutions.

Unlike Varonis or Titus, we have a capability of evaluating over petabytes of data in real-time by using a cluster of four to five servers

It was a case of Much ado about nothing, as they soon discovered that no tool offered the exact capabilities that were necessary, paving way to the birth of an idea, CyberCentric!

In-depth, the problems that Jeremiah noticed within the DLP space were multipronged, and one portion of the problem set was the inability to classify data accurately. To solve this conundrum, in April of 2017, CyberCentric began selling the commercial version of its data classification engine.

Fast forward two years, and the company’s solutions have made their presence felt across a few large organizations. But this did come with its fair share of issues, as deploying within large enterprises is no easy feat, especially if you are new in the space. To make things complex, CyberCentric’s solutions would have to ingest and analyze petabytes of data from disparate systems in near real-time. Despite the difficulty of the task, Jeremiah and his CTO Praveen were able to get a stable and scalable version of their software running and successfully too. Till date, the CyberCentric platform can be found running seamlessly in these organizations, while Jeremiah and his team are venturing further with their solution and into other regions.

SO, WHAT IS THE HYPE ALL ABOUT?

The platform can be used on CyberCentric’s cloud infrastructure or any organization’s private infrastructure. After installation, the software begins to search the internal network and the external web for copies of the sensitive data, which may have been leaked without a company’s knowledge. CyberCentric then begins to take steps to recover or permanently delete the leaked data and prevent further leakage. The system can be installed within two hours on-premise or in 20 minutes for a cloud account. Within hours of installation, the CyberCentric platform identifies every device within a network. It determines which of those devices contain sensitive data and which people within the company have access to it.
The CyberCentric platform was designed with three things in mind: ease of use, deployment, and maintenance. Moreover, CyberCentric provides 24X7 support to all of its customers via phone, chat, or email. “CyberCentric eliminates the necessity to have too many staff for data security, so a pretty sizable firm can run data security with two or three employees and it would not be much of an issue because our system automates the orchestration of protecting data,” adds Steptoe. The solution automates these tasks making SOC 2, PCI, and HIPAA audits to be performed in days opposed to months.

For instance, a biopharmaceutical company approached CyberCentric as they learned about the leakage of their sensitive data about a cancer therapy drug. The client had been working on developing the drug for decades and had already invested a lot of money in the project. One employee of theirs had resigned and joined one of their top competitors. Now crucial data related to the drug was available to the competitor. The client wanted to know precisely the information that was exchanged between the employee and the competitor. The recipe for developing the drug was contained in thousands of pages. CyberCentric was able to identify emails where the employee mentioned passages that were heuristically or contextually similar to the information that was actually inside of those recipe files for developing this drug. Based on that, CyberCentric was able to conclude that in particular emails, this employee was referencing to the drug without directly mentioning it. Thanks to the pieces of evidence provided by CyberCentric, the client was able to fight the case in court.

“The key differentiator for our company is the ability to build AI or natural language processing software as I have worked with this technology for over 15 years,” states Steptoe. “We have six patents pending and have gotten two patents,” adds Steptoe.

In the coming months, the company will be working aggressively to grow its team, expand its user base, and release version 2.0 of its solution. CyberCentric is releasing a cloud version of its software by the first week of August, which is aimed at assisting businesses to comply with New York Shield Law at zero cost. Moreover, the company will provide the platform for free to SMBs that are registered as a business in the State of California for CCPA purposes so that they can stay compliant with State Legislations in Cybersecurity and keep their customers safe. “At the end of the year, we will be releasing a game-changing AI product not just for the security space but in general for any tool utilizing AI as the product will add a new level of capability to Object Character Recognition (OCR),” concludes Steptoe 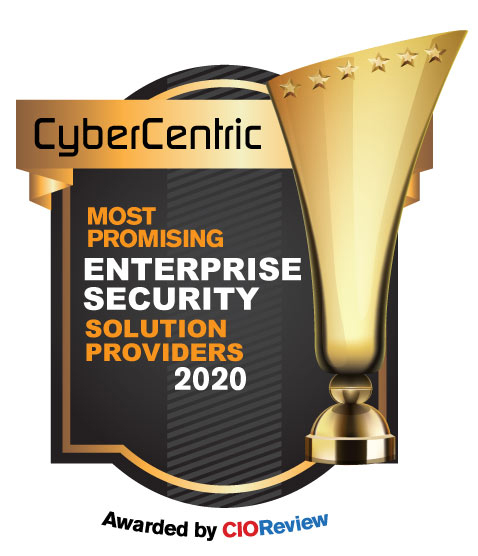 Description
CyberCentric is an NYC startup founded in 2016 by experienced cyber security professionals while faced with the real world challenge of discovering sensitive data and ensuring that it is used as expected by users. CyberCentric offers an all-in-one solution for managing and monitoring a company's sensitive data. The cybersecurity platform uses machine learning to scan data across networks in real time, reporting the locations of specific data as well as who is using it and how. With CyberCentric, only authorized personnel will be able to access the data 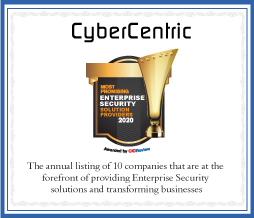 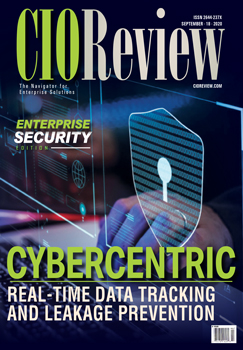